I found out that a play was going on — and in fact it was opening at 3pm. Most of the cast and staff were from UP and I was friends with a lot of them. It’s not often I get to see a play at opening “night” so I decided to jump on this opportunity to watch Sakuntala.

I have a lot of friends from India and I would later end up talking about the legend of Sakuntala (or Shakuntala). The story was based on an Indian epic but it was very Pinoy. The aesthetics, the romance, the quest, the machismo. Ultimately, what it means to be vulnerable, young, and in love is always best captured by a Filipino cast.

I regret not taking pictures with the cast afterwards. I would like to extend my congratulations to everyone, especially Papa Neil, Tatang, Paj, Japhet, Kuya Ohm, Meliton, and, special mention to the actors who were just budding theatre freshmen when I left but are now full blown theatre artists: Chase, Fritz, and Gabo.

I was talking to Papa Neil after the show and I told him there’s a certain quality, a je ne sais quoi, if you will, about Philippine theatre that is not present in other countries. A raw emotionality, perhaps, a certain level of grit, but that’s oversimplifying. Papa Neil suggested it’s because in the Philippines we are brave and we fight. And even if we don’t understand the text all the time, we fiiiiiight and we find a way to present it in its truest essence.

I was supposed to meet PB at UERMMMC (is that enough M’s?) however the show ran late so I told her I’ll meet her at BGC. I took an Uber to what people consider the “Singapore” of the Philippines. This is apparently the “it” place to be in these days.

While PB was still busy having dinner with her dad, I decided to ring up other friends in the BGC area. Nina was available and so was Dean. I met Nina right away and we went to Mercato. She wanted to know where I wanted to eat and my answer, right away, was Filipino street food and, obviously, the Mercato is just the best place to get that. 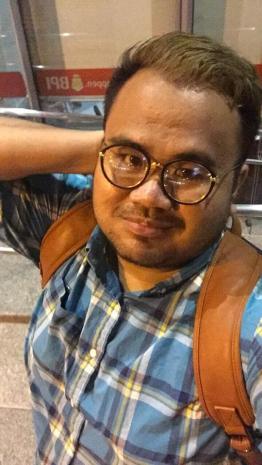 Dean followed soon after and we reminisced about the time when he was my actor for various plays. He told me about life in BGC and the various workshops and events he attended. Unfortunately, he could not stay to meet the rest of the gang but it was a lovely catch up nonetheless.

Precious arrived a little later and both he and Nina wanted to eat somewhere that wasn’t a street food fair, so we decided on a nice Korean place nearby. To a certain sadvantage, as well, as Precious put it: PB would not go to a place like Mercato but when she finds out we’re in a fancy Korean restaurant, she would probably even order a bottle of wine.

After eating, PB came and she brought Simon with her. We were now supposed to go to Nectar, the apparently new queen of gay bars in Manila. (Yeah, I know, I’m still a loyal subject of BED.) However, they suggested we grab a quick drink at the Tipsy Pig first as some of them didn’t really feel like clubbing.

At the Tipsy Pig, I got a frozen margarita, which melts faster than I hoped it would. We laughed, talked about high school, about who’s dating whom, and who’s broken up with whom. PB just graduated from med school and is taking the Board exams soon so it was very fortunate we were able to steal her from both her studies and her hospital rotations.

A little past midnight, PB and Simon left. Precious and I stayed for a little bit. We were a bit tired to go to Nectar now but we did come to a few realizations.

When I first arrived in Canada, someone told me that when I come back to the Philippines I will realize three things: (1) that everyone has changed, (2) that I have changed, and (3) that that is okay.

Nostalgia is such a weird thing. My memory of the Philippines is but that — a memory. It no longer exists. The Philippines now is not the Philippines five years ago. Of course by that I refer not only to the macroperspective but to the little details. To how we were as friends, to who we were as people.

I am not the same as when I left. What I am looking for, what I want, and what wakes me up every morning are totally different. And I can say the same for all my friends. As Precious himself said, they themselves, if they can see each other once a month, that’s a good month.

The other day, Precious told me that he seemed to have matured and that dreams of riches, of Porsches, have long gone. I have told him I felt the same. And I felt that everyone of my friends are in the same place — we no longer dream of Porsches. This does not mean we have stopped dreaming, but the dream of the Porsches is an abstraction of success. What we envision these days is tomorrow, the next day, next year — clearer visions, unclouded judgments, and the drive to get them.

I’m really proud of them. When I left, my friends were either still students or just climbing up their respective career ladders. Now, when I look at where they are, it’s amazing what they have accomplished.

I never really experienced this kind of realization. I left just a few months after submitting my thesis so in my mind, that kind of “student lifestyle” was frozen in time. Now that everyone has a job, everyone is busy, everyone is starting families or relationships, we tend to have a different view on what friendship means.

Precious walked back with me to Mercato where I got more isaw and chicharon bulaklak for take-out. I was supposed to meet up with Three later; however, I was really tired so I figured, hey, it’s no longer a perfect week, but I mean, if I have Three and Four in one day maybe that kind of counts?